Style and Structure of the Historia Augusta 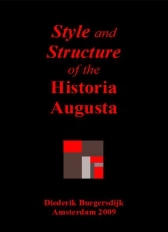 Diederik Burgersdijk analysed stylistic and structural aspects of the Historia Augusta, a late-ancient collection of Roman imperial biographies, in which the emperors reigning from Hadrian to Diocletian, 117-284 AD, are described. From his study significant differences are apparent between the different parts of the work, which points to the use of different source material and to a creation of the work in multiple editors. This is an important supplement to the revolutionary thesis of Dessau in 1889 that the Historia Augusta wasn’t written by six different authors, as the names of the authors who accompanied the books have suggested for centuries.